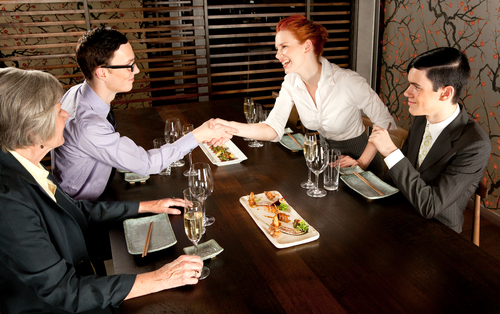 It is becoming increasingly common for business referral networking to take place in the context of a working lunch or an evening meal. Through the use of social media networks such as LinkedIn and Eventbrite, it is possible to find numerous local business groups and networking opportunities.

Britain has some of the most prominent and expensive restaurants in the world, particularly in London and other major cities. Most towns and cities offer a variety of cuisines, particularly Italian and French inspired restaurant chains, as well as the multinational chains of fast food establishments. Larger cities will often host a choice of Chinese, Indian, Middle Eastern, American, Thai, and Japanese restaurants with multicultural cities like Manchester and London being able to cater for the most demanding of tastes. In recent years, British food culture has seen the increasing popularity of “gastro pubs”, where high quality restaurant food is served in a more casual public house environment, often with a good selection of drinks and real ales served on the premises.

Probably the most famous national dish is Fish & Chips, typically battered cod, haddock or pollock with a portion of chipped potatoes, deep fried and sprinkled with salt and vinegar. This dish is available from numerous local fast food shops selling take-away meals. In England, another very traditional dish is the Sunday Roast, most often this is a joint of beef, roasted in the oven with potatoes and served with Yorkshire pudding, mixed seasonal vegetables and gravy. Most pubs, hotels and brasserie-style restaurants offer a carvery roast dinner on Sundays as a comparatively inexpensive menu option. In Scotland, a very traditional dish would be boiled Haggis served with mashed potatoes and turnips; and in Wales you would find Cawl, a rich stew made with Welsh lamb, leeks, parsnips, swede, potatoes and carrots. Generally, every region has its own speciality dishes and it is one of the most pleasant experiences to discover the various tastes that are available.

In the UK, meals with work colleagues are more often the subject of social or festive gatherings than formal opportunities to discuss business and may include spouses or partners, depending on the occasion.  Therefore, it is acceptable to use any such events as an opportunity for informal discussions and the development of social bonds.

It is important to take note of the exact time of the meal and understand the various terms that may be used to refer to any proposed meal:

Confusion around meal times is rife and, in fact, the British will also use some of the words interchangeably with meanings often influenced by local dialects. For example, a fish supper in Scotland is actually a very large portion of fish and chips, which can be eaten at any time of day. The words dinner and lunch are reversed in some areas in which case tea replaces the word dinner which simply refers to the main hot meal of the day. Also, different food names can have different meanings depending on which area of the country you are in. If in doubt, it is advisable to ask a local person for clarification.

Generally, British managers are very willing to discuss business matters over a meal, where the intention is clear beforehand. The golden rule is to follow the lead of your host since people will inevitably differ in terms of their business entertaining practice. Over the last few decades, the practice of inviting business colleagues into your home has diminished considerably and the vast majority of business meals take place in restaurants, pubs or cafes.