Christmas in the United Kingdom

In the UK (or Great Britain), families often celebrate Christmas together, so they can watch each other open their presents!

Most families have a Christmas Tree (or maybe even two!) in their house for Christmas. The decorating of the tree is usually a family occasion, with everyone helping. Christmas Trees were first popularised the UK by Prince Albert, the husband of Queen Victoria. Prince Albert was German, and thought that it would be good to use one of his ways of celebrating Christmas in to England.

Holly, Ivy and Mistletoe are also sometimes used to decorate homes or other buildings.

Most villages, towns and cities are decorated with Christmas lights over Christmas. Often a famous person switches them on. The most famous Christmas lights in the UK are in Oxford Street in London. Every year they get bigger and better. Thousands of people go to watch the big 'switch on' around the beginning of November.

Like a lot of countries, Nativity Plays and Carol Services are also very popular at Christmas time. The Church that I go to always has a Carols by Candlelight Service where the church is only lit up by candles. It is a very special service and always makes me feel very Christmassy! Lots of other British churches also have Carols by Candlelight and Christingle services.

Children believe that Father Christmas or Santa Claus leaves presents in stockings or pillow-cases. These are normally hung up by the fire or by the children's beds on Christmas Eve. Children sometimes leave out mince pies and brandy for Father Christmas to eat and drink when he visits them. Now, some people say that a non-alcoholic drink should be left for Santa as he has to drive!

There are some customs that only take place, or were started, in the UK. Wassailing is an old anglo-saxon custom that doesn't take place much today. Boxing Day is a very old custom that started in the UK and is now taken as a holiday in many countries around the world.

In Scotland, some people celebrate New Year's Eve (which is called Hogmanay) more than Christmas! The word Hogmanay comes from a kind of oat cake that was traditionally given to children on New Year's Eve. All across the UK, in cities and towns, there are fireworks to celebrate the New Year. Two of the most famous fireworks displays are in London, along the River Thames, and in Edinburgh at the Hogmanay celebrations.

Also in Scotland, the first person to set foot in a house in a New Year is thought to have a big effect on the fortunes of the people that live there! Generally strangers are thought to bring good luck. Depending on the area, it may be better to have a dark-haired or fair-haired stranger set foot in the house. This tradition is widely known as 'first footing'. In England it is sometimes said that a stranger coming through the door carrying a lump of coal will bring good luck.

In the UK, the main Christmas Meal is usually eaten at lunchtime or early afternoon on Christmas Day. It's normally roast turkey, roast vegetables and 'all the trimmings' which means vegetables like carrots & peas, stuffing and sometimes bacon and sausages. It's often served with cranberry sauce and bread sauce. (Traditionally, and before turkey was available, roast beef or goose was the main Christmas meal. In Scotland, some people might even have Haggis instead of turkey!). One vegetable that is often at Christmas in the UK are brussel sprouts. I love them but lots of people don't!

Dessert is often Christmas Pudding. Mince pies and lots of chocolates are often eaten as well! The dinner table is decorated with a Christmas Cracker for each person and sometimes flowers and candles. 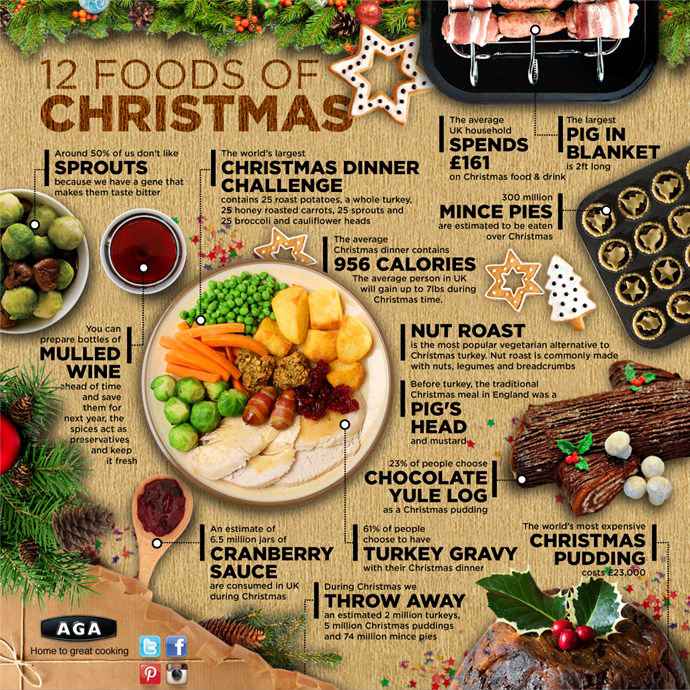 The UK is also famous for Christmas Cake - some people love it and some people really don't like it! It's traditionally a rich fruit cake covered with marzipan and icing - and often top with Christmas themed cake decorations like a spring of holly. 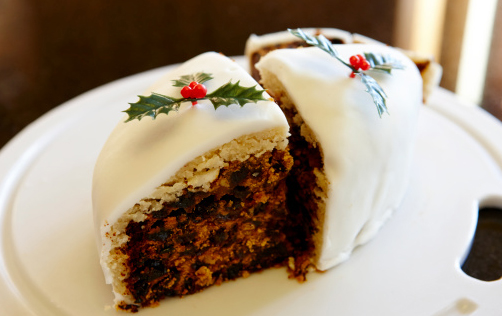 In the UK, it doesn't snow very often, but people always want to know if it will be a 'White Christmas'. The British definition, used by the UK Meteorological Office (who say if it has been a White Christmas in the UK or not!), is that a single snow flake has been seen falling in the 24 hours of Christmas Day! This doesn't happen a lot in the UK!!!