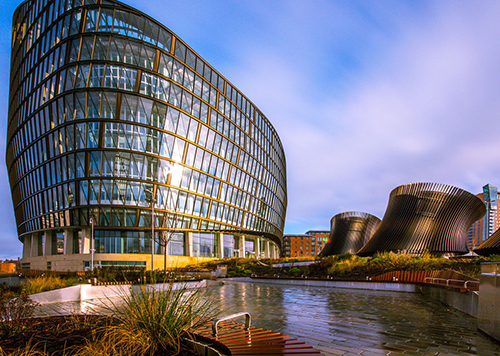 One Angel Square is The Co-operative’s head office and support centre in Manchester.

When Her Majesty The Queen officially opened One Angel Square in November 2013, it was declared the most environmentally-friendly building in the world. The Building Research Establishment Environmental Assessment Method (BREEAM), an internationally acclaimed system of assessing buildings, gave One Angel Square a score of 95.16% - the highest ever awarded.

The 15-storey building is a three-sided structure, with a fully glazed double skin facade that curves both horizontally and vertically around the building. There is a full-height atrium at the heart of the triangular building, its three sides formed from white-painted concrete balconies at each floor level. Behind the balconies there are large, column-free open-plan office floors.

The double skinned facade and soaring open atrium are key to creating natural heating, cooling and lighting. The atrium, for example, floods the building’s interior with light, and the facade helps to minimise heating and cooling loads.

In summer louvres at the top of the facade will open to allow the warmed air trapped between its inner and outer skins to rise up and out of the building. In winter these louvres will close so the facade can form an insulated blanket around the building.

‘By designing to the BREEAM standards we aim to save 40-60% of our current energy costs in the head office complex. Our new home will create a benchmark for every other UK business and showcase what can be achieved through a socially responsible approach to design and construction.’