The story of London double-decker bus 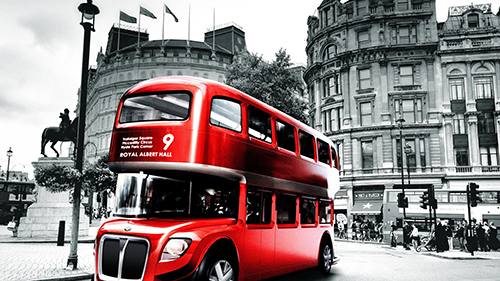 Big red buses are recognised - and even found - all over the world, and people recognise them as symbols of London. Visitors climb into London buses to go and see the Niagara Falls. London buses can be seen driving round Europe to advertise big department stores, or British events . They don't need to have the words "London Transport" on the side of them: they are instantly recognised by millions of people!

It was over 100 years ago, on October 25th 1911, that the London General Omnibus Company ran their last horse-drawnomnibus through the streets of the capital. Since then the big red motor bus has been London's "king of the road".
Today, every day, thousands of Londoners use the big red buses to move - often slowly - around town; and lots of tourists know that a one-day London bus pass, valid on all regular bus routes, offers a wonderful way to see  Britain's capital city.

The most famous London buses, however, are not those that filled the Capital's streets in the 1930's, but the powerful "Routemasters" which date from the 1950's and 60's. These are the buses that have been taken all over the world, the buses that you can see in the tourist brochures, and the ones which have been sold, in miniature, to millions of visitors and souvenir hunters.

The Routemaster is an icon in itself! With its open platform at the back end, the Routemaster was the most popular bus in London, because passengers could climb on and off anywhere, even if the bus was moving (though this was not recommended!) These buses were designed specially for London, by people who knew what London needed, and they  served their purpose  well, and did so for half a century!

Things started to go wrong for the London bus in the late 1960's. That was when the Ministry of Transport decided that it would only give financial help to bus companies that bought new buses with doors! Suddenly London Transport found they could no longer buy any more of their favourite Routemasters, that they had designed. They had instead to choose other models. Today, European Union rules also say that new buses for public transport must have doors.

London, however,  resisted the bureaucrats! Determined to keep the buses that Londoners (and tourists) wanted, London Transport kept the old Routemasters going as long as possible. Five hundred of the solid and popular old buses were extensively renovated, and put back on the road as good as new, if not better! But not even the Routemaster could resist the winds of change. Modern transport systems require one-man buses, not buses with both a driver and a conductor. So in 2005, the old Routemasters were finally taken out of normal service.

Still, it's not too late to enjoy travelling on one of these historic buses. Some of the old buses have been preserved, and were used on two "heritage routes" through the centre of London, specially for tourists.  Route 9 went from the Royal Albert Hall to Aldwych, via Piccadilly circus and Trafalgar Square; but the last Routmasters were used on this route in 2014. The only route left is Route 15, which goes from Trafalgar Square to the Tower of London, via St. Paul's Cathedral.  But other old Routemasters are used by the tourist bus companies, which offer trips round the centre of London.